West-Ukraine: Hbaid’s Experience Made Public To Help Young People Get On The Right Track

West-Ukraine: Hbaid’s Experience Made Public To Help Young People Get On The Right Track

Velyka Dobron (‘Nagydobrony’) – Hungarian Baptist Aid launched a new program entitled “For increasing the working potential of West Ukrainian civil society organizations among young people”, which involves visits organized at schools and training programs implemented in the Subcarpathian (Transcarpathian) region of the Ukraine. As a participant in a grant program funded by the International VisegradFund, Baptist Aid is partnering with charity organization LifeAid and with Slovak, Polish and Ukrainian civil society organizations.

As part of the project, the Hungarian professionals held presentations in Velyka Dobron, a village in the Subcarpathian region of the Ukraine, from March 18thto 21st, 2019, which were attended by the representatives of the Nagydobronyi Családsegítő Szolgálat(the social services agency of Velyka Dobron), a secondary school operating in Uzhhorod (‘Ungvár’) called the Drugeth Gimnázium, the Dutch organization Small Miracles, the Második Esély Jótékonysági Alapítvány(‘Second Chance Charity Foundation’) from the Subcarpathian region, the Sas-Fészek Alapítvány(‘Eagle’s Nest Foundation’), the Calvinist Mission of Tisaahtelek for the Gypsies (Tiszaágteleki Református Cigánymisszió), the Irgalmas Szamaritánus Református Gyermekotthon(‘Good Samaritan Calvinist Children’s Home’) of Velyka Dobron, and the Drug Abuse Clinic of the Subcarpathian region (Kárpátaljai Drogambulancia).

Dávid Gál, acting director of Hungarian Baptist Aid, used the time allotted to recall the past 23 year history of the charity organization. He talked about all the experience the staff and the leaders of the NGO had gained as one of the largest charities of Hungary in the course of their humanitarian programs implemented inside and outside of the country to help the needy. He remembered the “days of yore”, the dangerous missions and the challenges of meticulous planning.

Staffer Kató Fellegi focused on questions of mental hygiene, in other words, of psychological health in her presentation, since in West-Ukraine, and more particularly in the Subcarpathian region, this topic is rather neglected and in need of development efforts in comparison with the rest of Europe. The experience had accumulated and become mature enough to be made public in the course of medical missions performed in past years – partly in the Romany camps of Subcarpathia in cooperation with American volunteers.

Renáta Toszeczkycalled attention to an acute problem: in certain big cities of Western Europe, it is unfortunately a salient observation that a large number of girls selling themselves on the streets are of Hungarian, Ukrainian or Romany origin. One of the most successful areas of operation of Baptist Aid is none other than the fight against human trafficking: the listeners paid special attention when it came to detailing the methods used.

There is scarcely any other homeless care professional in Hungary who could say more about the problems arising from a homeless life situation than Dr. Marcell Miletics, the director of the department of the charity organization called Utcafront(‘Street Front’). This, and the fight against addictions, was what he talked about, and there was no shortage of ensuing questions from the participants of the program.

Does the future belong to peer helpers?

“We cannot sway young people from trying narcotics if they are curious. What we can give them is ‘munitions’. Educators have a duty to know the situation” the expert said. “and the problems connected to substance abuse, because a frank conversation is only made possible by having adequate knowledge about the topic. That’s when a chance presents itself for defusing the curiosity that young people have. It is important for an atmosphere of trust to exist between parents and educators on the one hand, and the children on the other for the cooperation to become effective.”

Dr. Marcell Miletics thinks this cooperation is the necessary basis for having a chance to protect young people from the consequences of drug abuse, to prevent them from destroying their lives.

“Training peer helpers might be the solution” he continued. “So that there would be young people helping their own peers, because they can become extremely effective in prevention and when intervention is necessary. Training peer helpers gives extra knowledge, while also facilitating personality development. A young person of nearly the same age can have credibility representing things that a parent or educator might assert in vain. Training peer helpers makes it possible to design an excellent syllabus, to apply effectively for grant programs and to build good cooperation: all these are excellent resources.”

Talking about narcotics is itself a kind of drug prevention: because we must not leave young people alone. Protecting the youth living in deep poverty requires a complex solution: education, training, work opportunities, adequate income and leisure activities are all needed. Having nothing to do or being faced by low expectations might in themselves contribute to developing a drug addiction. But too high expectations are also among the possible causes, Dr. Mileticsaffirmed.

The audience asked what the signs of addiction may be.

“New friends, because the old ones disappear. Not being able to keep to schedule is very characteristic of addicts, he is late, he doesn’t go to school, all the things that he considered important earlier lose their importance more and more, he sleeps a lot, nights turn into days. Behavior changes, because drug use get integrated into the personality. Such young people often resort to lying or theft, they are unable to account for what they did with their time. Later, the specific signs appear, the utensils of drug use, but many parents fail to react even then, because they believe that such things are not possible in their family. But they are.”

It is very difficult to be a parent today, because there are many kinds of dangers threatening young people, and narcotics are the greatest one of them.

“Physical withdrawal symptoms can subside in a few weeks in a hospital setting. But psychological dependency is different, you need a rehabilitation for that. But what should come after the rehabilitation? This is a separate challenge. The way to help young people well is by getting to know them, in an open and not prejudiced environment, by organizing programs that they enjoy, that present an alternative and a chance against the circle of companions that pull them down.”

The expert mentioned both a Swedish and a Hungarian example.

“It was a professional of Hungarian extraction working in this field who, before delivering a young person from the ‘orphanage’, said the following: here’s a piece of paper, write a list of all the people you can count on, all those you have a positive relationship with. Many people then appeared on the paper, from the grocer at the corner to, say, a grandmother. Next, the helper called these people together and asked them to cooperate, because a supporting background can have enormous power. There was an artist type living at the homeless shelter where I work, a homeless drug addict, with lots of acquaintances from the night life of Budapest. He was a well-known figure, but he had lost his home because of the drug abuse. I made him write a list of the acquaintances he could count on, and more than two hundred names were written together, one of them the director of the Budapest Hall of Art (Műcsarnok) at the time. I phoned the director, and we organized a meeting. The homeless man also came, he saw the lots of people, who had all come because of him, he saw how many people loved him, and were there for him in his misfortune. He immediately got a job, money was collected for him, three months later, he again got an apartment of his own.”

The majority of people using drugs are sensitive and vulnerable. It is important to work with them in a way customized for their needs. Because every human being counts, and if we are able to protect a single person, it was already worth the effort.

Balatonföldvár-Hungarian Baptist Aid organized a training for Roma pastors from September 24th-29th. The program will continue in January in the city by the lake. 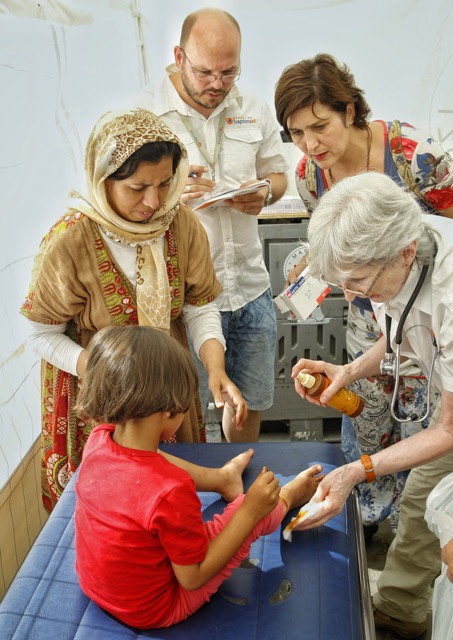 Hungarian Bapist Aid and the Baptists helping the Refugees

Budapest- Each day, Hungarian Baptist Aid provides care for around 200 refugees, mainly mothers and children who are crossing Hungary, and offers night crisis shelter for those injured or sick. The humanitarian organization provides help in other regions of the country as well.

On August 3rd, 2003, a bomb attack hit UN’s headquarters in Baghdad and twenty-two aid workers lost their lives. Since then, every year on August 3rd, we remember those heroes who have sacrificed their lives during their service.